Mezuzah for Bedrooms off Hall

Mezuzah for Bedrooms off Hall

Does this (see picture) require a mezuzah? I assume the doors off the hallway are bedrooms. Not sure the entrance to the hallway is itself a doorway or not. 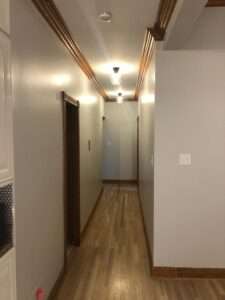 There are two requirements to be obligated in a mezuzah: two doorposts AND a lintel (horizontal beam on the top of the doorway for the door, if it exists, to close on) (Rambam, hilkhot tefillin umezuzah vesefer Torah 6:1;  Shulchan Arukh YD 287:1). [See, however, Hagahot Maymonit on Rambam 6:1, who cites an opinion that either of these criteria suffice to create a mezuzah obligation].

In your picture, there are two separate areas – see diagram 1 – the long narrow hallway (A), and the wider hallway that enters from the left side (B).

As to B – the first question would be whether we view the corners, where B makes a right angle with A on its left and right wall – marked with asterisks – as doorposts, since we can see those two corners as creating the frame for a door. Rosh states that we can count these as doorposts, but other poskim argue against this, and still others try to limit Rosh to special cases, where the corners would actually close off some of the space of B (see Chazon Ish 172:2). So, even going from B to A, there is a question if we have doorposts.

The case of one doorpost is addressed in Gemara Menachot 34a. The initial statement is that without two doorposts there is no obligation to place a mezuzah.  The Gemara then introduces the position of Rabbi Meir who says that even one doorpost is sufficient, provided that it is on the right. Rosh (hilkhot mezuzah 14) and the Tur (YD 287) follows the position of Rabbi Meir, whereas Rambam (6:1) rules that two doorposts are needed.  The Shulchan Arukh YD 287:1 rules like Rambam that two doorposts are required. Shakh 1 notes the opposing position of Rosh and the Tur and rules that we should put up a mezuzah without a berakhah when there is a doorpost on the right, even if there isn’t one on the left.

In addition to all this, if B and A are both hallways, and B is not some type of a room, then that is an additional reason to not define them as separate spaces vis-à-vis a mezuzah.

As to the lintel – there is a debate in the poskim whether the ceiling can count as a lintel (see Chazon Ish 172:3 and Mikdash Me’at YD 287:5) . In this case, in addition to the ceiling, you also have the drop down segment from the ceiling between B and A. However, this is not directly at or on top of the corners. Although very close, the ruling is that to count as a lintel, it has to be directly on top of the doorposts (see Shulchan Arukh OH 362:11, Magen Avraham 19, and Mishnah Berurah 63). In addition, here it is connected on the sides, not on the top, which also doesn’t work. So the drop-down part of the ceiling does NOT count as a lintel.

CONCLUSION – In this case, there are many reasons to assume that you are exempt (serious question if there are doorposts; if they are both hallways, then it is essentially one room; based on the case there might only be one corner/doorpost; and there quite possibly is not a lintel). Thus, I would not put up a mezuzah, even in the space heading from B to A. Some might advise putting up without a berakhah, but in my opinion this would lead to unnecessary chumrot regarding mezuzah in general, in situations where there is little or no reason to put one up. So – in short – no requirement for a mezuzah here.

January 16th, 2023
Tevilat Keilim for a Mug with a Rubber Stopper

Tevilat Keilim for a Mug with a Rubber Stopper